By Ota Uma Ben November 04, 2016
On Saturday, 29th of August 2015 I left my house in Port Harcourt and faced the road to the great Eyimba City Aba. It was the wedding day of friend, former colleague, former self-con roommate, course mate and professional colleague. As you may be familiar with, that day is the popular ENVIRONMENTAL SANITATION. Even though you hardly see the impact of that sanitation. Why e be say anything wey dem declare or do sanitation the environment go dey worst than e day before the CLEAN-UP? Have you wondered why? That will be a discussion for another day. of course you do know that on such days movement is prohibited between the hours of 7am and 10am. When I got to the Aba express road, the hold-up wey I see there tie better wrapper ooo!
This is just few minutes past 6am and I needed to get out of Port Harcourt before 6:30am and get to Aba before 7am. I wonder why they made this Sanitation day the same in the South South and South East. I used to enjoy the days when some states are observing clean-up while the next state is not. But on this day, what should I do?


So I quickly climbed a bike straight to Imo River (Umuebele) after Obigbo. From there I got a bus heading to Aba Ngwa. Lucky me. I got to Aba by 7am and some un-uniformed uniform men had mounted stage and collecting that which is due them. The bus drop me at a place called ENYIMBA. ENYIMBA is just beside the ARIARIA market. Wait oo! I met someone and asked "are you sure there is clean up in Aba today?" "Yes" was the reply I got. I was unable to reconcile it. There is CLEAN UP so NO MOVEMENT but PEOPLE WERE MOVING EVERYWHERE! I asked another fellow who told me in Igbo language that ENYIMBA is autonomous. What? That reminded me of one of my favorite nursery rhymes "This is the key to the Kingdom". In Aba city, there is a city. 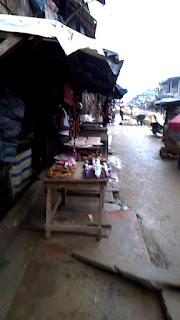 What I am saying here is that the CLEAN-UP in Aba and Abia State does not affect this Market Lane called ENYIMBA. Umu guys were just going about their normal business. Shops were opened. marketing was going on. Oso ayia was in progress. And more especially, PRODUCTION & SHOE MANUFACTURING was actively on-going. I walked to the end of that lane and I walked back. I was looking for 2 things; Mama Put Table and Where I can change the sole of two of my office shoes. In the process of that search I discovered so many things. Some of the things I discovered where;
1. Almost all the shops were dark. No electricity.
2. The Machines used in manufacturing their products were all manual and locally made.
3. All the shops I had the privileged to peep inside had this small stoves 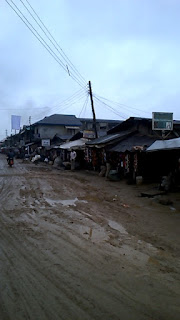 4. The Stoves were lite with fire. Fire was used for illumination and also for finishing touches.
5. Each shop had their separate and unique product
6. The products were manufactured for export and local market.
7. The road is usually flooded when it rains and not conducive for any business to thrive and succeed.
8. and so on and so forth. 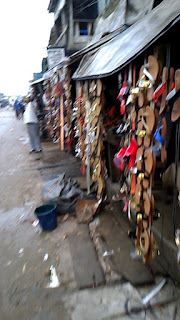 In these harsh situations, I observed that;
1. These young men are willing to work and make earns meet
2. They had taken out time to create their own autonomous city inside the city. Here, I wondered if they even pay taxes. Why should they pay taxes?
3. They are not bad, fake and dubious as we all see them. They are only producing with the available materials, equipment and resources they have.
I took time to take pictures and also observe the method of production. My Country People, this is a huge industry that can generate good jobs and Government economy. I can't believe that we are still making foot wears with the most crude ways on earth. What is the Government of Abia State doing about this? What has the Democracy we all vote for done for us in 16 years? Is it not better we stick to the Military regime? Of course not! To be continued!