WHO IS THIS BOY'S FATHER? 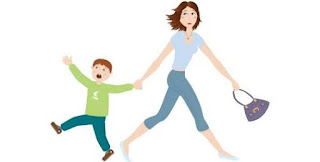 My People ehhh! It's been a long time since we came to Everyday People! We have been on a long break but this story can't wait oo!

I thought my ears have heard it all but this one Na another levels o! Which kind world be this self? Wetin person no go hear.

Ok, yesterday I was in a Taxi from Rumuomasi to Eleme Junction and someone how I and the taxi driver got talking about the high cost of transportation in Port Harcourt. I lamented the cost of transport from Ireibe to NTA road Mgbuoba on a daily basis. And immediately he heard NTA he thought I was a journalist who works with NTA. Next thing was "Oga as you dey work for NTA e get one thing wey I want make una talk for radio as I no get their number to call them."

I carefully told him that I do not work at NTA but work at NTA road but nevertheless I can still help him share his story through a blog. "Dem dey talk am for blog?" I told him "yes". Then he started to narrate someones story that concerns him.

This young girl who I will Call Linda was married to a man who I will call Mr. Unknown. Nine Months after marriage she put to bed a bouncing baby boy. Of course the husband was happy and overwhelmed with the news of the boy. He is not a very rich man but he has been able to take good care of the wife and the baby boy. As the boy grew the Man began to travel for outside jobs Properly to expand the search for money in order to be a god husband and responsible father.

Meanwhile, this Taxi Driver has a neighbour in their yard who is still trying to find his feet. He knew the boy to have a girlfriend back then who later got married. To his surprised after awhile tr former girlfriend starting coming back to look for this his yard boy and this time with a baby boy. She informed the yard boy who I will call Evans that the boy who I will call Bobby is his own. What?

So, let's get it straight. Linda was dating Evans and got pregnant for Evans while planning marriage with Mr. Unknown. Linda gave birth to Bobby. Now, Linda is saying that Bobby belongs to Evans and not Mr. Unknown.

So, to stretch the short story long, Linda began visiting Evans on a regular basis anything Mr. Unknown is out of town. This Taxi driver took note of this and became worried. Then Linda began to accuse Evans that he is not taking good care of his son Bobby. Then Linda travelled to Evans village and met his Father. She showed Bobby to the Old Man informing him that he is his grand son and a son to his son Evans. Story! Anyway, the Linda told the Old Man that she wants the Evans to claim ownership of the Bobby. The Old Man got worried and decided to invite his son Evans and Linda to the village to resolve the issue.

On that fateful day Evans landed the village only to meet Linda with Bobby in the village. What is the issue? Linda wants Evans to marry her because the baby she had in Mr. Unknown's is Evan's son. Evans asked her about her husband and she said that she has him under control and that she doesn't want to marry him again. So, Evan's Father sent Evans and Linda to go and meet Linda's Mother and explain all these to her.

My people, I am tired of typing because the Taxi Man that told me this story is in Dilemma. He said the Linda has stopped talking to him because he is against whatever she is doing and promised to expose her if he knew the husband. Evans is worried and is asking the Taxi Man what he should do. Evans said that he is trying his best to buy things for the boy but from what he is even seeing the boy is not lacking anything. Evans thinks Mr. Unknown is doing well with Bobby and Linda and that he can't cope with maintaining them.

So, at this point I asked the Taxi Man if Evans could be richer than Linda's Husband for her to want him so badly and the Taxi Man told me that Evans just learnt Welding and still trying to find his feet. He also told me that Evans told him that Linda has been disturbing him for marriage since and that it was because of her "waka waka" attitude that made him not to think of marriage and that he Evans has someone else he wants to marry when the money is available.

My People! The Taxi Man is worried because he thinks the life of Mr. Unknown is in danger. He claims that Linda can do anything to be with Evans and he the Taxi Man wants to go on radio and tell this story by mentioning Bobby's real name so that Mr. Unknown can take actions before Linda do anything to him in order to take Bobby back to Evans. Other Passengers in the Taxi felt that it is the life of Evans that is in danger. They feel that if Mr. Unknown finds out that the Paternity issue of Bobby is in contention that he might do Something to Evans.

How do we stop all these things from happening? Do you think anything is going on between Linda and Mr. Unknown and maybe she wants to get back at him?

What do you think the Taxi Man should look for Mr. Unknown and inform him?

Do you think that the life of Mr. Unknown is in danger?

Do you think that the life of Evans is in danger?

Or rather, who is in more danger, Mr. Unknown or Evans?

What do you think will be the fate of Linda if Mr. Unknown finds out?

In fact, what kind of person is this Linda self?
Thanks for taking your time to read this episode on Everyday People. Do drop your comments and thoughts in our comment box below.