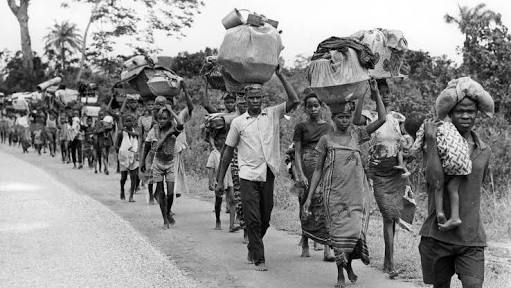 Our Land was pure.
The grass was green.
Our Water was clean.
The leaves could cure.

We drank from the stream
With leaves bridged to the rock as cups.
As we laved our body under the heavy drops,
Our body needed no cream.

We were at peace

The Palm wine tasted like honey.
The village square was our group chat.
Words were strong and laughter from the heart.
Love was not bought with money.

Our Farms yielded with interest.
We had enough to eat and ship.
Our eyes are closed when we sleep.
We worked, worked and had our rest.

We were not at war

Our Merchants traveled South, West and North.
With products of trade for exchange of coins.
Women were married not just for groins.
Deals were made, no one was fought.

Then came the experts with hats and guns.
They took our lands and made us Roomers.
They deceived our neighbors and made us brothers.
Our rights were taken and we became their puns.

We were just neighbours

They joined North, South, West and East.
Sampling cultures, languages and philosophies.
Building bridges with religions and varied ideologies.
Then they called everyone to a National Feast.

We were not brothers

Then there was war

Our brothers left our sisters and children
To fight our neighbours who turned brothers and turned enemies
A gap was created, farm lands turned to colonies
We saw the amputations and ashes of our brethren

But there was no Victor no Vanquish