IT BURNED BUT WAS NOT BURNT

By Ota Uma Ben May 11, 2016
At about afternoon yesterday 10th May, 2015, I was busy putting finishing touches to a report in my office. Suddenly, (Can someone say SUDDENLY) I began to perceive that something burning. The smell got so bad that I switched off the wall socket in my office before my cheap laptop go burn. Since the office of one of the Firm's Partners was close to me, she perceived the same smell as we both ran out of the office towards the Electricity Change Over. The receptionist had also run out wondering where this "loud" smell was coming from. As we got outside the office building we noticed that the Sales Girls of the Supermarket close to us had also ran out. What was burning? "Chai"! "Chimo"! People were screaming as smoke engulfed a new Toyota Siena (Whatever Model). In that confused state, I didn't have time to take pictures (That will be so cruel). The owner of the car ran to and fro the car not knowing exactly what to do.
1. Did he forget his Fire Extinguisher?
2. Does he even know how to use the Fire Extinguisher?
3. Does he even know what to do when there is a Fire Outbreak?
4. Did he collect loan to buy the car?
5. Are his enemies at work here?
He opened the driver's door. He closed it back. He ran away. He ran back. My Madam ran into her office to get "Fire Extinguisher" abi her "Car Key". She too was confused because I heard her ask "where is my Fire Extinguisher" and I felt like singing "If you ask me, na who I go ask" (Now that will be so wicked). She quickly opened her car boot and brought out the Fire Extinguisher. She handed the baton over to me as I ran across the busy NTA/Mgbuoba/Choba road to the other side. All of a sudden, Nigerians gathered round the car and nobody knew who the owner of the car was again. Someone even asked me "who be the owner of this car?" People brought out their Fire Extinguisher both old and new. Some even bought new ones at the spot (luckily someone sells Fire Extinguishers around there). Me self no cocoma no wan fall my hand, so I looked for a willing Nigerian and handed the baton over to him. He pulled the trigger and shot at the car. Already the car was white with all the powders and detergents that had been used to quench the fire. 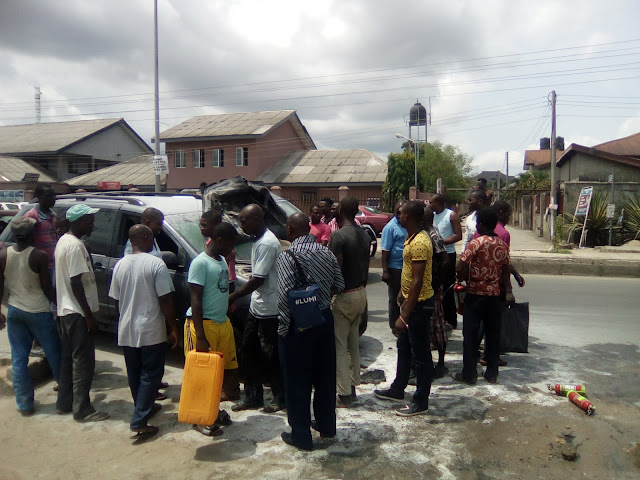 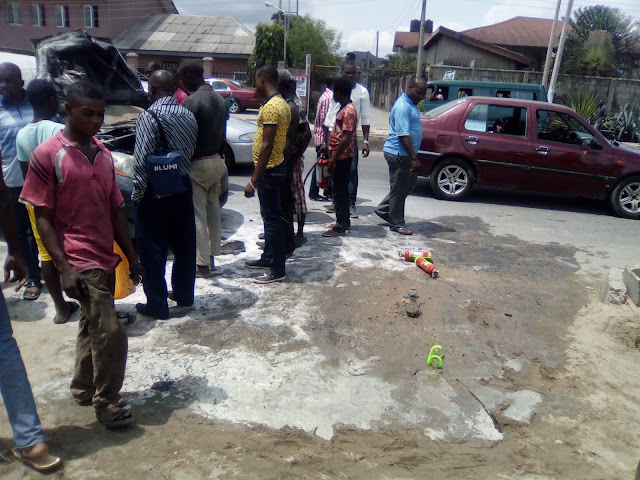 1. Quench the Fire and,
2. Open the Bonnet.
Automatically, three teams were formed. The first team was those busy with trying to stop the fire burning under the car. The second team was trying to open the bonnet and deal with the root cause of the fire. And the third team was the sympathizers. The sympathizers did a remarkable job. They provided MOUTH LOGISTICS; "No use water"! "Oh, use omo water"! "Open the bonnet na"! "Chai, see fire under oo"! "Na new motor oo"! "Who do this man this thing o?" 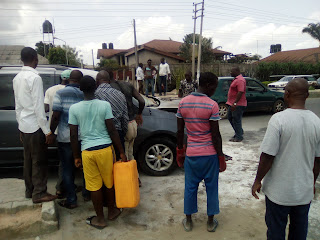 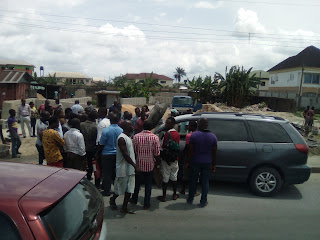 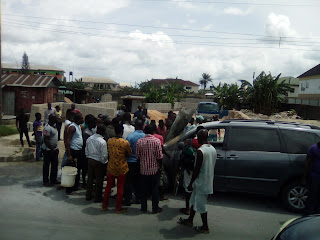 So, in my conclusion, the Car burned but was not burnt. The damages could be fixed easily (If the cash dey oo). We made it happen. We saved that man of extra expenses. We did it. Not the Politicians! Not the Government! Not the Preachers of hate! Not the bombers! Not the extremists! Not the Foreign Aids! Not the Foreign Partners! Not the Press! Not the Dividers of Nations! Not them! They use us as Pawns to fight their battle of Interest. Religious Fights! Tribal Fights! Herdsmen Fights! Who really gain from these fights? Who become richer? Who become poorer?  These people promote fights and division just to have access to what is not theirs. This country wants to demote another Country's ruler and impose their own man just to have access to what is not theirs. This man wants to remove another man just to achieve a long lost aim and agenda. Every Fire has a root cause. Until the root cause is identified and dealt with, the fire will keep burning. It doesn't matter how much and how long we sympathize. It doesn't matter! What matters is coming together and making a decision to quench the various fires burning all mover this area called Nigeria. Irrespective of where you are coming from or the language you speak. At the end what matters is your head on your neck. Those using you to fight can board a plane and seek asylum anywhere. Can you find a boat to Cameroun? Or Togo? Be wise my friend and render help to your neighbor when under attack. Don’t attack your neighbor on behalf of that man up there.

Rather help to the next man who is under attack. You don't know who is next! Divided or isolated, we cannot quench the fire. But united as a team, we can pull out the root of the Fire.
Our LANDS may be BURNING! Don't let it get BURNT!
#BetterDaysAhead