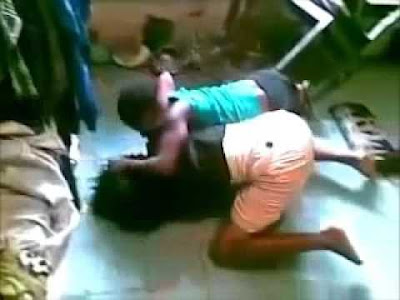 My People for this Community! How una dey? Last week we started a story on Everyday People and we promised to finish the story this week.

In continuation of the story, below are the extracts from episode one:
“I am saying WHEN WAHALA JAM GBESE NA PALAVA E GO GET! The problem became so much that even the neighbors became so uncomfortable with the whole arrangement. This trouble is worst anytime the Man and his wife made love in the night. Our aunty R will always pick a quarrel with the wife of the house. The most painful part is that this man will just disappear leaving the two women to dig it out with themselves.
If you were in the shoes of this wife what would you do?
Will you allow aunty R to squat with your family in the first instance?
Will you ask your husband to drive his sister away?
Will you fight your sister-in-law out of the house?
Will you start a prayer program for aunty R?
Will, you just allow everything to pass and hope for #BetterDaysAhead?”

So, one day the wife of this man traveled leaving her children with aunty R. As usual the Husband and Man of the house will be on duty at work so the children were left in the care of aunty R. What do you think she did to the children in the few days her sister-in-law traveled and her brother was on outside work? Nothing happened oo! Aunty R took proper care of the children.

The worst part of this story was that this wife did not know about this sister-in-law before she got married to her husband. What I am saying is that all through their engagement (if any), courtship (who court who?), introduction, traditional marriage, and church marriage (I doubt they did this), there was no aunty R in any of these scenes. Then all of a sudden there appeared an aunty R!

Did I tell you that it was this man’s full responsibility to take care of aunty R? Yes ooo! Even before she moved into his house, he made sure she didn’t lack anything that she needs ranging from transport to dresses to pocket money. Which kind mature sister be this one?

One will want to ask a few questions here ooo!
If the elder brother of this man had a school, then it means he had some money and it also means that he will be living in at least two bedrooms flat.
Why didn’t aunty R put up with this elder brother?
Why did she choose to stay in this one-room apartment with this other brother?
Is she really this man’s sister?

The story had it that some concerned neighbors approached the wife to express their displeasure towards aunty R and her attitude towards her. The wife even quarreled with her neighbors accusing them of trying to break her marriage. One of the neighbors even asked her if she was sure that aunty R was her husband’s sister that they don’t understand her movement and actions, especially towards the husband.

When the questions began to pour out, the man had no option than to rent a house for aunty R somewhere up the street. The man’s elder brother who owned a school discovered this and became very angry. His anger that his younger brother’s children are enjoying free education in his school and his brother had money to rent a house for another woman. Did you just read another woman? Yes o! Another woman. Aunty R is nowhere related to this man! This foolish man brought his mistress abi na girl friend to live in the same one room with his whole family. They even discovered that he was owing to the ever-smiling and humble landlord some house rent. And he had the mind to pay for a house for aunty R. No wonder aunty R was always coughing and clearing her throat whenever the man and his wife were hanging out on their bed. Choi! See people oo! Nothing wey man no go see for this Nigeria!

The elder brother got angry and demanded that his younger brother’s children start paying school fees or leave his school.
The Landlord got angry and evicted them from his house.

The man got confused and shared his properties and children among friends and neighbors. He dropped his bed at Okumagba and dropped his chairs at Jakpa. He dropped some children for Hausa quarters and some children for Effurun! See as this man take hand scatter him family! Aunty R was nothing but a home breaker. How can a man bring his woman-friend to squat in his one room apartment that is not even enough for his wife and five children? Aunty R even claimed that she was pregnant for this man but nobody heard anything again from them.

The end of this man was a tale of misery and disgrace. The Children dropped out of school. His children became street children. Kids that were smart and intelligent in school could no longer attend schools because of their Father’s foolish act. What a shame. I even heard that one of the children became a real street boy. I wonder where T is now. I pray that T doesn’t join the bad girls in the society because she was very beautiful and smart.

Fast-forward to fifteen years after, we heard that this man is recovering in his flesh because when this incident happened, the man began to dry up! Better suffer enter this man body so tey to see food chop was a problem. He was dismissed from his work and life became tough. Because of all these he avoided his former neighbourhood up till this moment when people began to see him around again.

We shall stop this story here and hope that things will turn around for this man and his lovely children. What about his wife? Do you think she will still be with him till now?

The questions for this week are;
1. What would you had advised the wife to do when she discovered that aunty R was her husband’s mistress and girlfriend?
2. Do you think that aunty R was actually pregnant or was she trying to cage the man down?
3. If you were to advise this man after he was exposed, what would you had said to him?
4. Do you think the elder brother’s decision to demand for school fees was fair and the right thing to do?
5. If you were the Landlord, what would you had done?
6. What will you advise men who cannot stick with their wives?

We wanna wish you a happy and fruitful week ahead but remember "WHEN WAHALA JAM GBESE NA PALAVA E GO GET!"